If In Doubt Zoom Out, Bitcoin Profitable Days Still at 91.5%

Even despite the recent haircut off Bitcoin’s market capitalisation that saw prices once again crash spectacularly through the $10,000 level, those buying the crypto asset throughout most of its history would theoretically be in profit if they had held onto their investment until today. In fact, Bitcoin prices were lower than they are today on 91.5 percent of previous days.

The observation reminds those invested in Bitcoin of the importance of considering longer time frames. The longer term chart of Bitcoin’s price also shows that patterns like those we are seeing of late are nothing at all new.

Bitcoin’s Short Term Price Moves are a Distraction for Many

Research provided by LookIntoBitcoin and tweeted by Bitcoin podcaster Vortex (@theonevortex) shows that Bitcoin bought on 91.5 percent of days throughout its entire history is in profit.

When in doubt remember to zoom out. #bitcoin

The simple metric applied to the above chart shows the number of days on which the price was higher than its current level and the number on which it was lower. As you can see, during the vast majority of Bitcoin’s history, prices were lower than their current levels. LookIntoBitcoin describes the metric in the following terms:

“This chart highlights the aggressive growth of Bitcoin’s adoption curve over time, which is reflected in its price. Because supply is limited, as demand grows price moves up. For investors, it also demonstrates the importance of understanding the market cycles of Bitcoin to avoid buying market cycle tops. The drawdowns from cycle tops can last a long time, around 2-3 years in previous cycles.”

Looking at the history of Bitcoin too, it’s worth pointing out that current price patterns have happened many times before. Large crashes are often followed by a bounce to the upside and another crash. Each of these previous rises and falls are accompanied by similar emotional behaviour in both the markets and social media alike. At the moment, the wild optimism of a few weeks ago seems to have been replaced by calls for Bitcoin to plummet somewhere in the range of $0 to $6,000.

In his Tweet, Vortex points to the fact that Bitcoin traded at lower prices than it does today on a massive 3050 out of a total 3,332 days in its history. Further highlighting the importance of this longer-term time preference is Twitter user ChainJunkie (@ChainJunkies). Responding to Vortex, they state that the longest anyone has had to wait before seeing a profit on their Bitcoin investment was 1,250 days. This was during the period of bear market that followed the 2014 all-time high of around $1,300. 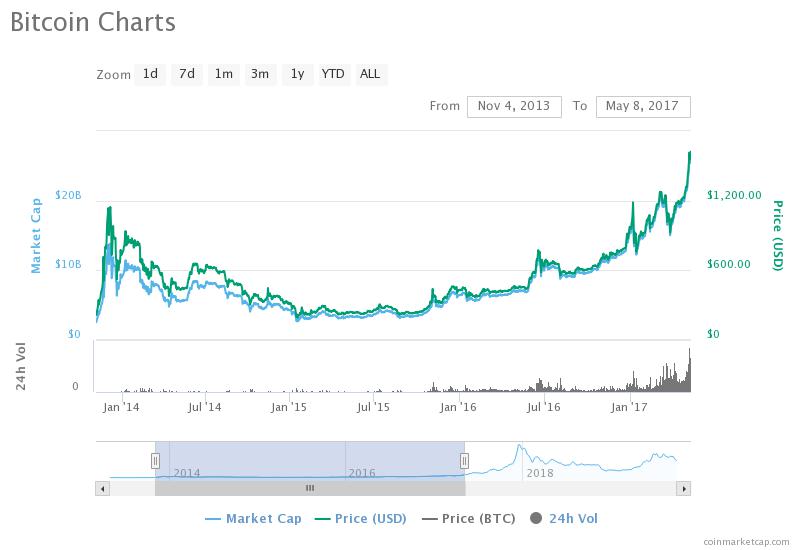 Buying the top of the 2013 rally might have felt pretty stupid at the time but holding the following years would have paid off big.

Of course, there is nothing to say that Bitcoin will repeat its previous patterns and once again soar past its current all-time high as proponents like John McAfee insist that it will. However, if previous price action surrounding Bitcoin halving events is anything to go by, it very well could do.

Related Reading: Bitcoin Climbs Back amidst Gains on Wall Street

The post If In Doubt Zoom Out, Bitcoin Profitable Days Still at 91.5% appeared first on NewsBTC.