Bitcoin Pumps by $800 in 20 Minutes: $150 Million in BitMEX Shorts Liquidated 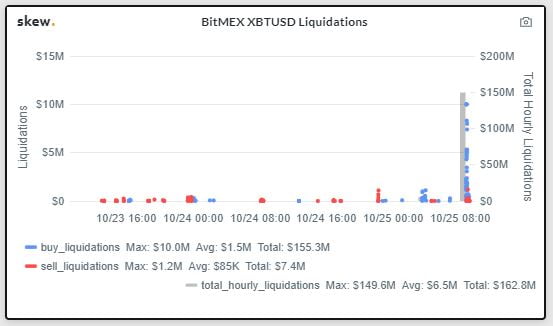 Wow. In the past 30 minutes, Bitcoin (BTC) bulls have absolutely made their presence known. Within a ten-minute time frame, the leading cryptocurrency surged from $7,700 to $8,500 — representing a nearly 10% gain.

Altcoins followed suit, also surging by double digits as bulls finally managed to make a stand against the bears, who had brought Bitcoin from $8,000 to $7,400 just days earlier.

Related Reading: Bitcoin Price Indicators: Worse Has Yet to Come, Move Under $7,000 Likely

As normal, this bout of volatility — which came unexpected — caught many traders aback. According to cryptocurrency analytics provider Skew.com, this surge higher, which majorly took place within a ten-minute span of time, saw just under $150 million worth of BitMEX short positions liquidated.

The move just happened minutes ago, so analysts are still grappling with the implications for Bitcoin.

Not an expert but this might be bullish. pic.twitter.com/C8eeYlwuCh

There has also been renewed discussion of an infamous prediction made by a user on an anonymous forum, in which he/she/they claimed that December 15th, 2018 was the ultimate bottom, that Bitcoin would reach $5,300 in April, $9,200 in July, and $16,000 in October. The latter has yet to come true, while the former facets of predictions did.

If we keep going like this we're going to make it

The post Bitcoin Pumps by $800 in 20 Minutes: $150 Million in BitMEX Shorts Liquidated appeared first on NewsBTC.